Like Erik and Tony, I've been doing this stuff for a very long time...

As a matter of fact it was I and my buddy Bob Welsh who together started the SHBA back in 1973 in the aftermath of the hubbub from Comet Kohoutek ( touted as "the comet of the century" and turned out to be pretty much of a dud...). The first meeting or two were held at the Bethel Park Senior High School (I had graduated from BPSH in 1971,) and thereafter the meetings were held at "the Seminary" (then, the Holy Ghost Fathers' "Immaculate Heart of Mary Seminary" / IHMS) on Brush Run Rd. atop Rocky Ridge on the county line at the bottom of Bethel Park. Needless to say, the skies on the county line were a lot darker back in those days and the Seminary was an excellent spot for observing locally. 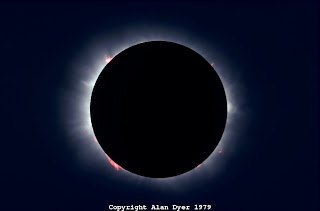 On February 25th, 1979,  I boarded a Greyhound bus in Pittsburgh by myself, bound for North Dakota. Yes, that's right, North Dakota... in February... with the hope that the skies would be clear the next day on the prairies north of Minot, ND. I will expand the narrative here at a later date but let it suffice to say that (a.) I did survive; and (b.) I made it well into the path of totality and got a spectacular view of the total solar eclipse of February 26th, 1979 (and no, although that is a photo of the 2/26/1979 event, I did not take that one  - - Heh, I wish!)

Yet, almost by accident, this beautiful asterism in Corvus, right next to M104, acquired my name in a major star atlas (Uranometria) and several prominent catalogs of deep sky objects... 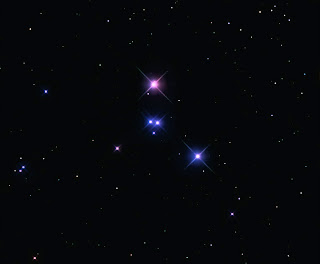 Tony of the SHBA posted the following to a discussion of it on Cloudy Nights:


" My friend Eric Canali here in Pittsburgh, an avid observer, independently "discovered" this asterism years ago and mentioned it in a local astronomy club newsletter. Recently, Sue French mentioned it in a Sky & Telescope column devoted to interesting objects in and around Corvus. Here is her description:

* Next, soar 1.1 degrees west-southwest from M104 to the multiple star Struve 1659. In my 105-mm scope at 47x, I see a 5-minute isosceles triangleof stars with a smaller isosceles triangle centered inside it. My 10-inch scope shows color in all but the dimmest of the six stars. In order of decreasing brightness, I see them as yellow-white, deep yellow, pale yellow, yellow, and gold.

* I was first introduced to this sextuplet by John Wagoner in the 1980s at the Texas Star Party. He dubbed the group Stargate, because it reminded him of the hyperspace stargate used by the hero Buck Rogers in the 1979-1981 television series. Wagoner created and ran the Astronomical League's Bulletin Board Service, which he named Stargate. Not surprisingly, others have discovered this group as well. Australian amateur Perry Vlahos wrote to tell me he knows these stars as the Double Triangle, and the book Star Clusters (Brent A. Archinal and Steven J. Hynes; Willmann-Bell, 2003) lists it as Canali -- named for Pennsylvania amateur Eric Canali, who calls it 'that pretty little triangle-asterism-thingy.'

A simple little asterism with a rich background."

SO... Basically, I'd been impressed with the object since the 1970's and was always puzzled why such a nice little object in such a heavily trafficked patch of sky had never gotten notice in the primary texts of the day (Webb, Burnhams, etc.). So, I wrote up a little article for the Guide Star (newsletter of the AAAP) describing it and asking for verification on my observational notes from others. As best as I can tell, the editors preparing the revised edition of the Uranometria Atlas and Catalog had the same questions about it as I and, when they searched the Web for references, one of the only things they could find on it was from an online archive of the Guide Star newsletters: my little article and field sketch... So eventually, Pete Whener, one of our old time SHBA members now in another part of the country contacts me and says "Hey Eric, congratulations for your citation in Uranometria !"  - - I was dumbfounded... Hey I'm no David Levy, not even a Tom Reiland... but it sure beats flushing some bucks down the International Star Registry...         - ERIC C.


A boy and his Moon Rock: 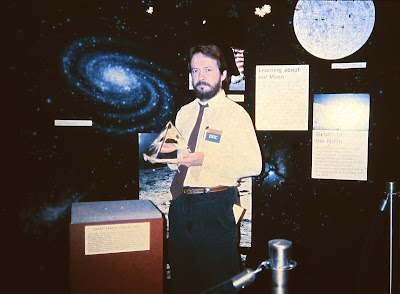 As Floor Operations Manager at Buhl Planetarium, I had the responsibility (privilege) of taking out and returning the visiting Moon rock to our safe-vault every day. The cast plexi pyramid carried a chunk of lunar rock about the size of a child's fist. To my knowledge this was the largest lunar sample ever to go on public display in the Pittsburgh area.      - E.

From Wed. night June 13th, 2012, this shot was taken by just carefully
pointing and shooting my Canon PowerShot SX130iS into the eyepiece of
my 8" f6 Newtonian Reflector... 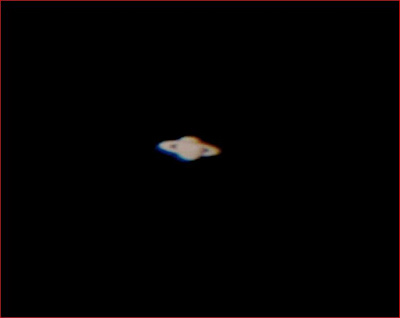